The Green School has amassed an impressive and growing team of scholars from across the university in support of the multidisciplinary curriculum to be offered at the center. The initiative has gained considerable visibility and acceptance among the university community, as well as among some of South Florida’s most prominent Muslim and non-Muslim community leaders.

The Muslim World Studies lecture series has already had significant success in student engagement and community outreach, with top experts coming to FIU to speak about issues affecting diverse areas of the Muslim world, from Africa and China to Turkey and the Middle East. Notable speakers have included: 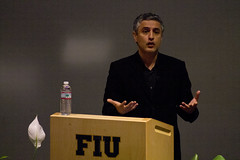 • James Zogby, Founder and President of the Arab American Institute, public intellectual and scholar of the Middle East

The lecture by Reza Aslan was a highlight of the series, drawing nearly 500 students and community members to the Green School’s Broad Auditorium.

The Green School is also actively tackling subjects of critical and timely importance through a robust series of discussions including:

• A discussion on the Iranian accord led by Ambassador William Luers

• A teach-in on the Syrian crisis led by faculty experts

• A panel discussion on the role of women in Islam

• A lecture on the military coup in Turkey and its implications at the state, regional, and international level

• Islamophobia and Muslims in the United States